What Makes for a Good Contract?

A large number of contracts are negotiated and concluded in everyday business without the involvement of lawyers. Standard contracts are used, and collections of samples are freely available. Such model contracts can be helpful depending on the qualifications of their authors, however, caution is required because the standard contract, which fits every business deal, does not exist. Therefore, it is strongly recommended to ask a legal professional for assistance when a contract is needed.

As the first prerequisite for a good contract, each party must be aware of what it expects from the transaction, and this expectation must be communicated openly and transparently to the other contracting party. This sounds banal, but it is not. It means that the parties have to discuss the expected course of the business together and identify not only the individual rights and obligations, but also potential performance problems.

For these, rules should be provided at the time the contract is concluded, even if these negative points are not addressed in a business relationship. In the event of a long-term relationship, it is also necessary to discuss the changes that may occur during the course of time: prices must be adjusted, supply quantities varied, rental space increased or reduced, and cooperation could be considered without a dispute. For these cases too, modalities, rights and obligations must be created.

Expectations and intentions should not only be disclosed, but also documented. The content of a contract can be unclear, for example, because the parties did not agree on a certain point, either consciously or unconsciously. If there is a court dispute, the court will construe the contract in accordance with well-established rules of interpretation. The court asks how the recipient of a declaration of consent could, at the time of the conclusion of the contract, understand and have had to understand the statements and behaviour of the other party (as a sensible and honest judger), taking into account all circumstances recognizable to him. The decisive factor is then no longer what a party really wanted to explain, but what arrived at the recipient of the communication.

Then a contract should, as far as possible, reflect the actual contract reality. If, at the time the contract is concluded, the parties assume that the contract certificate is merely unnecessary “lawyer stuff”, and that in practice they don’t adhere to the written procedures anyways, the most important aim of the written contract is missed. Because in the event of a dispute, no provisions can be found to resolve a particular disputed question. Legal consultants and (internal or external) jurists should therefore take the process of drafting contracts from the start of the negotiations to the signing of the contract as a common task, which requires an ongoing exchange and a lot of mutual translation work. 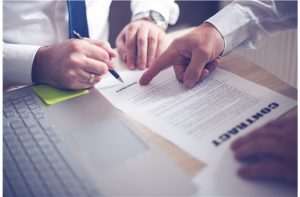 A clear structure of the contract as well as a careful drafting of contracts always pay off, even if this is complex and time-intensive. Traditionally, contracts are structured as follows:

Contradictions within a contract or between different contract components should be avoided as they make the subsequent interpretation unnecessarily difficult. Also, the terminology should be used uniformly.

The clear and unambiguous identification of the parties is important, especially in the case of groups with several group companies. Often, even the obligations of companies and those of individuals are mixed, which can lead to the fact that they cannot be enforced because they have to be claimed against a person who is not a contracting party at all. An extract from the commercial register (in Thailand “company affidavit”) should then be used to ensure that the contract is signed by persons who are actually entitled to sign.

Main part of the contract

The core element of the contract is the parties’ agreement, as this results in their rights and obligations. This section describes the physical and monetary performance and the details of the implementation of the contract, such as the contractual area, the delivery and payment modalities, the date of fulfilment, the place of fulfilment and the mechanisms for checking and adjusting the contract content. In this part, a guarantee may as well be included, namely the rules for guarantee, liability, collateral, insurance, etc. The structure can follow the topics to be regulated or the rights and obligations of the parties. For more complex contracts, a combination of these is often a good idea.

Finally, it should be remembered that the law is a dynamic system that is constantly changing. Long-term contracts or re-used standard contracts should therefore be periodically reviewed, in order to ensure that they take account of the latest legal developments.

If you have any questions related to contracts, please contact us at [email protected]