A joint venture (JV) is a business arrangement in which two or more parties agree to pool their resources for the purpose of accomplishing a specific task.

If two previously independent companies form a new company, or if they decide that one partner will invest in the other, then a so-called “equity joint venture” is formed. Another option for cooperation is the so-called “contractual joint venture”, in which two companies coordinate their business activities.

Regardless of how they coordinate business activities, it is important to define the mutual interests as clearly as possible, to create synergies and not to conceal differences. After all, it’s all about trust, especially in international business dealings. At the same time, the agreement must be legally sound and secure. 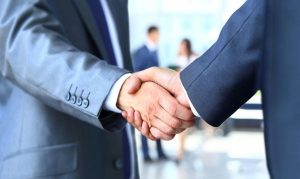 That is why joint venture companies with foreign partners rarely come about at short notice. In most cases, the establishment of a joint venture company is preceded by a long phase in which the partners work together in a different capacity. A typical situation is that the foreign partner previously worked for the local company in one way or another on the foreign market. If the local entrepreneur realizes that the founding of his own company can give him greater opportunities for influence and flexibility, and sometimes also tax benefits, he will face the decision to either give up the former partner or to work together with him. For the latter — apart from the usual considerations on synergy effects, loss of know-how etc. — especially in foreign countries, it can be said that the trust that has grown in possibly years of cooperation is highly valuable, and should not be abandoned lightly.

– Legal form, name and registered office of the joint company
– Amount of the respective shareholding or their proportional relationship to each other
– Purpose of the company
– Desired start and end of business
– Fiscal year, time and place of the shareholders‘ meeting
– Deviating from the statutory quorums and majorities in shareholder meeting and board or other bodies
– Special resolutions
– The nomination right for positions to be filled within the new company
– Restrictions on the transfer of shares
– Rules for increasing capital
– Non-competition clauses
– Confidentiality clauses
– Corporate authorizations
– Termination provisions
– Conflict resolution mechanisms

The Joint Venture Agreement may also include other matters, such as the text of the Company’s Articles of Association or a list of persons who are to take up certain positions at the beginning.